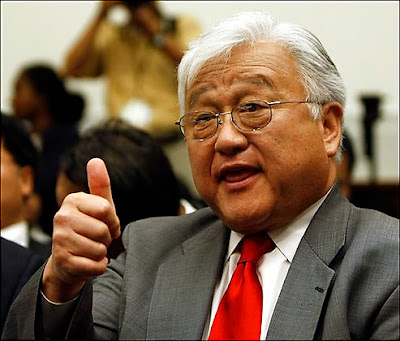 Rep. Michael Honda, D-Calif., gives a thumbs-up and says thank you to his colleagues after legislation was passed by the House Foreign Affairs Committee on Capitol Hill in Washington, Tuesday, June 26, 2007, expressing the sense of the House of Representatives that the government of Japan should formally acknowledge, apologize and accept historical responsibility for its Imperial Armed Forces coercion of young women into sexual slavery, known to the world as "comfort women", during its colonial and wartime occupation of Asia and the Pacific Islands from the 1930s through the duration of World War II. Honda is the principal sponsor of the bill.
(AP Photo/Susan Walsh)
Photo Credit: AP Photo

Anonymous said…
Yes, Congratulations, Congressman Honda! I am very proud of Mr.Honda because Honda is Japanese family name. We, Japanese, should welcome that the legislation was passed.
A part of Japanese can not face the historical facts of their own crimes because of lacks of braveness.
But true mutual reliances will begin after facing the real facts even in the case of the facts are regretable.
This is only the first step.
Our goal is that the government of Japan should formally acknowledge, apologize and accept historical responsibility for its Imperial Armed Forces coercion of young women into sexual slavery.
Please recognize that most of Japanese intelligent persons know these formal apologizes are necessary for our Japanese to maintain our dignity for the international community.
June 27, 2007 at 12:58 AM

Anonymous said…
In Japan, even among critics of PM Abe, there is a skepticism that the resolution is a politically-motivated one and not neutral.

However, I believe a movement of many people who support the human rights of "comfort women" has moved US Congress.

I believe also Congressman Honda, Speaker Pelosi and Chairman Lantos stand by the human rights of them firmly.
June 28, 2007 at 12:09 PM