As Gabriela New York's Jennine Ventura and I took the stage at Asian American Writers' Workshop on Friday, September 22, to launch LOLAS' HOUSE: Filipino Women Living with War, another work of art was also being launched. Unveiling of the "Comfort Women" statue in San Francisco. 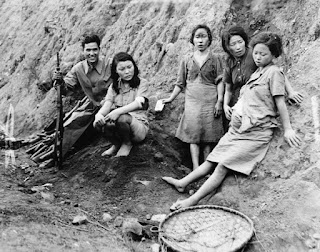 When I began my research in 1998, I could not find any text books with the women's stories.  I could not find a memorial to their legacy anywhere.  I could not find a photograph of the women, save a single black and white photo of four surviving Korean "comfort women," and one smiling soldier.  On Friday night, as I read from my book, a book that took eighteen years of researching, interviewing, transcribing, translating, writing and revising, I was well aware of the historical significance of this day.  I was sharing the day with artist Steven Whyte, who was also launching his monument to WWII "comfort women."

During the Q & A session of my event in New York City, a Japanese man raised his hand from the back of the room and asked us why we were referring to the women as "comfort women."  When I began to answer him, he attempted to interrupt me.  He attempted to correct me.  I spoke over him, into the mic.  I said, "Excuse me, sir."  In my mind I thought, the lolas are here and they are speaking in this book and I am witness to their stories.  You asked me a question.  It's my turn to speak.

Ianfu is a Japanese word.  It is what the Japanese government called women they held captive in "comfort stations" during war and made to serve as military sex slaves.  In some of the countries--China, Korea, and Japan--these "comfort stations" were specific buildings built to support the institution of systematic sexual slavery.  In the Philippines the "comfort stations" were makeshift garrisons--churches, government buildings, schools.  The translation of ianfu is "comfort woman."  It is not a term the women called themselves.  It is the term that names the horrific atrocity that occurred to more than 400,000 women and girls all over Asia.

For too long the women have been silenced.  Not anymore.

Since I began my journey, I have met more than 40 surviving Filipina "comfort women" and I have had the honor of also knowing Young So Lee, a surviving Korean "comfort woman."  There are memorials in New Jersey, Atlanta, Glendale and now San Francisco.  There is the art installation and living monument by public artist Johanna Poethig, Songs for Women Living with War.

And there is Lolas' House: Filipino Women Living with War.