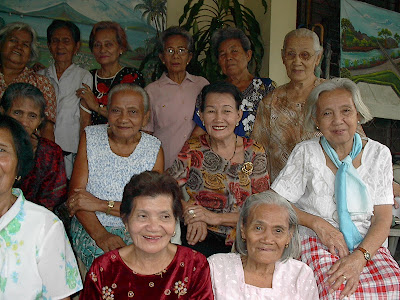 Lola is the Tagalog word for grandmother. And on Matimtiman Street in Quezon City, Philippines, Lolas’ House is a community center for a special kind of grandmother. The women of Lolas’ House are survivors of WWII. In South East Asia, 200, 000 young women were taken hostage by Japanese soldiers to serve as military sex slaves. The Japanese called them Comfort Women.

The stories begin in the quickness of the tongue. Formal, unforgiving, the lolas of LILA Pilipina have been taught how to give their testimony –especially to the media. They follow the script. After fifteen years, they can look right into a camera lens and state their name, their age, where they were born. They do it the way prisoners of war are trained to give away their name, rank and serial number. But that is only how they begin because soon afterwards an eye wanders from the camera and glances at me, the one beside the camera, the one behind it. And then the script alters. Sometimes a lola pats me on the arm or leg to make a point; sometimes she grabs my hand as she speaks. Right in the middle of an interview, lolas have been known to lift my palms up to the light and read the signs.

“You only need one good one,” I answer.

“Four kids. Mga-aasawa ka na.” She tells me I will marry soon.

Sometimes they take my hand to guide me to their scars – places where Japanese soldiers burned them with cigarette butts, scarred them with the blades of bayonets, or marked their skin by dragging them over barbed wire and cobblestones. The stories sink into my bones in just this way. When I tease a lola about her beauty or her youthful sense of humor the camera is forgotten and the voice softens. The lola becomes my lola and the story is a secret that she whispers in my ear.

During my research, I traveled to different islands and provinces of the Philippine archipelago to abduction sites where girls between the ages of 8 through 42 were kidnapped and imprisoned in garrisons – abandoned churches, city halls, farm houses and schools. Survivors took me to sites were their grass-roofed houses used to stand and together we relived their experiences.

I stood quietly in each space and closed my eyes. I considered the lives that were damaged there and I saw ghosts of soldiers walking with their guns and bayonets held up. I heard the crying of girls left swollen and bleeding, only to be taken once more without a moment to clean herself. Somehow in those moments I became that girl. The land, which was part of my ancestry felt like home. The strength of the women reminded me of the strength of the women in my family.
In Maxine Hong Kingston’s portrait of the famous woman warrior, Fa Mu Lan’s parents carve revenge on their daughter’s back, scoring the names of war victims’ onto her once smooth skin. They recorded what happened. They made sure that even in death, no one would forget.

The histories of the lolas are borne on the spines of their backs. Memories of war are carved in their skin in a way we cannot read. They must show us in a list of grievances that line their faces, and course their bodies in the forms of illness and disease. I document the sacrifices of the comfort women and come to understand my own connection to the women and my sense of self. As the lolas guide my hands to scars etched and jagged, I realized that I too have peeled my shirt off my back, and have invited them to score their histories deep into the curve of my back. Even as I am lost in the pain of these wounds, I write so no one can forget.