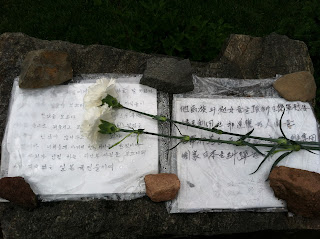 On top of the "Comfort Women" monument in Palisades Park, NJ, there are these notes in Korean and Japanese, held down by stones and blessed by these two carnations. I am told the notes are asking those around the monument to regard this sacred space with respect -- it is not a playground, it is not just any statue. What I note is that these messages are in Japanese and Korean, but not in English, not in Tagalog and not in any other language.  Perhaps it is the practicality of the matter -- many of the residents in Palisades Park are Korean -- still, this in an international issue and a crime not against not only Koreans, but all humanity. Remember that during WWII the Japanese Imperial Army took 200,000 women and girls from all over Asia -- including China, Australia, Indonesia, the Philippines and Korea. Japan would like nothing more than to isolate this between Korea and Japan, make the issue smaller than it is. Make it disappear. Are you willing to do that? And those in the Filipino American and Filipino communities -- what about our lolas? Consider what you can do to make our voices known, to keep this story in our history books and call it what it is: A crime against humanity.

It seems that every time I am ready to delve into another revision of my book on Filipina “Comfort Women” of WWII, Japanese government officials make noise (Last time, in 2007, Shinzo Abe said, “there wasn’t enough evidence to prove "Comfort Women" were coerced.”), as if to distract me from telling the stories of 15 Filipina “Comfort Women” who survived that human rights atrocity, to stop me from the task that has been building up inside me for so long.  Little do they know that every time they rise up in denial (most recently the NYT said the monument in Palisades Park “irritated Japanese officials”), every time they try to push another into silence, they inspire me.  They make me itch to write that book with such energy – so much energy that I must meet other activists, I must join them in their work, I must answer every email that comes my way.  No, this is not a distraction, these reactions from Japan.  These are inspirations. 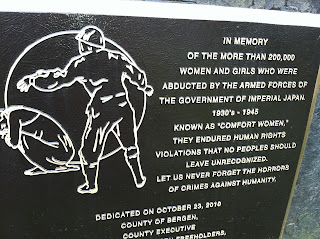 Last Friday afternoon, in quiet and wild anticipation, I took the 166 bus from Port Authority to Palisades Park, NJ.  I got off on Broad Avenue and Brinkerhoff and I walked the little neighborhood to the public library.  Just out of the car park, next to the driveway they had placed the monument on a tiny grass knoll,  surrounded it by newly planted trees and shrubs.  Hardly anyone was around and no one saw me as I walked onto the grass.  I stood silently.  I listened, just in case there were Lolas with me (in spirit, of course) or Korean grandmothers singing in the wind.  I stood silent.  I listened to what the monument said.  It was only waist high.  On it, one of artist Steve Cavallo’s soldiers stood with his back to the street and arms stretched out, giving orders to the Korean woman on the ground.  To protect her heart, she curled her arms around her bent knees.  She could not look at him.  Behind them, the rising sun.  The monument powerfully demonstrates the relationship between 200,000 Asian women and girls of WWII and their captors, soldiers of the Japanese Imperial Army.   This is what art does, right? When governments fail to do justice to their people, when it seems all have stopped listening and are moving forward with their days, it is the monument on the lawn, the painting in a gallery, the book on your shelf, or the spoken word poem singing from the open mic that makes us understand what’s really going on. 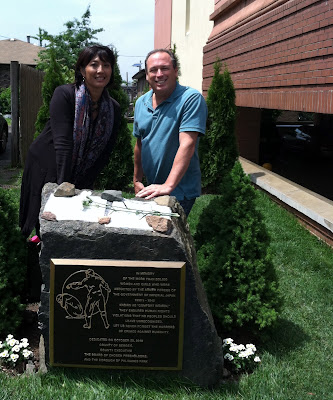 I had a wonderful conversation with Steve Cavallo. He was drawn into the cause when he began researching, developing and creating his Play Army Series  -- a powerful meditation on war and its affects on people.  Among them were Korean Comfort Women.  With the Japanese delegations requesting Palisades Park remove this powerful memory to WWII Comfort Women, Steve has found his way into the history books as he too, in his way, fights for justice.

Talking with him and speaking with Chejin Park, a Korean American community leader, it has become abundantly clear that we cannot let these stories disappear because they make Japanese officials “irritated” or “upset” or “unsettled.”  200,000 women and girls, some who have grown full lives and have passed on, some who never escaped the madness of that torture of systematic rape --  2000,000 women and girls were not simply inconvenienced, distracted, or caught unaware.

We should all be building monuments.  Why?  To remember.  To heal.  To know that even if the perpetrators and their government ancestors refuse to acknowledge the truth, we know the truth.  And we are not about to let it happen again.  Not ever.

If you have artwork, stories, poems, films or songs that you have created for the comfort women, contact me. I am working with other activists to gather all our voices. mevelinag@yahoo.com.  We would like to create an exhibit that demonstrates this history is not isolated to the Japanese and the Koreans and it is not a story that is simply about vengeance.  The capture and systematic raping of 200,000 women and girls all over Asia is part of the fabric of our world history, it is crime committed against humanity – and we must learn about it, remember it, take lessons from it and make sure it never happens again.