Then my suffering started at the hands of the Japanese soldiers. We were being raped night and day even in front of other people. Sometimes, they even bring us to the guard posts where they kept their machine guns in trenches made up of sacks filled with soil and placed on top of each other.

I was forced to stay in that garrison for three months. I was being raped by five to eight soldiers mostly during nighttime because we were forced to work in the landing field during the day. 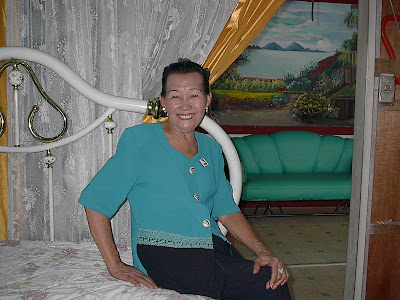 *****
When I met Lola Precsilla, she was the dancer, the one who was always smiling. To look at her, you would not be able to see the sorrow and the history of her life during WW2. She hid that so well. She taught me and the girls to tango. She painted brightly lit paintings of flowers and gardens. She was a healer who could place her hands on our bellies and foreheads and wish the pain away.

I got to interview Lola Precsilla. By that time, she and I were pretty close. She always smiled at me. She always held my hand. But as she told me her story that day, there was a tear set in her eye, glistening like a little memory of light, resisting the urge to roll down her beautiful cheek. She whispered to me, You understand? And I nodded and when it was our turn to perform the drama, I stood up and stepped into her shoes and the story took over my whole body. I felt it running through me as I watched the cousin being raped, as I lay down for the soldiers, as I rolled on the cement floor conjuring up the pain of that memory.

Lola Precsilla raised a family and kept her secret to herself for many years. I suppose that is how she got so good at pretending -- at smiling and dancing as if she didn’t have a care in the world. She had years of practice, acting like everything was just fine. When she finally stepped forward to fight for her apology, to reclaim her dignity, it was to the dismay of her husband and children. Her truth damaged their relationships in ways she had always feared.

Here is a portrait of her younger self. And a photo I took of her before one of her paintings. I was saddened to hear of her passing a year ago last April.

I won't forget how that story took over my body, how breathing was difficult, how I sighed without thinking, how I cried out, how the tear dancing in Lola's eye washed over me, came pouring out of me.