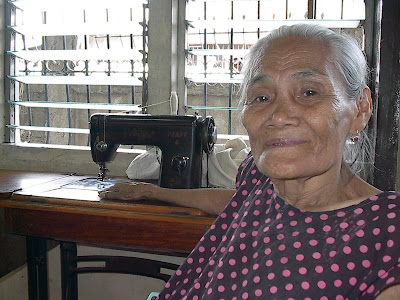 If I were to Google images of surviving Filipina “Comfort Women,” your face would pop up all over international cyberspace. You’d wear a backward baseball cap and a t-shirt and in your small hands you’d hold a big placard that would cover three quarters of your frame. The words “Justice for All Comfort Women” would scrawl across your body. And chances are you would be standing before the Japanese embassy in Metro Manila. Or maybe you would be marching before Malacañang Palace. Or standing on the curb down EDSA Boulevard, protesting the President’s State of the Union Address. You might even be standing before the courts in Japan, giving your testimony.

But today, we are standing face to face, in the cathedral in Madalag, Aklan – one plane and one long bus ride away from your home in Navotas, Metro Manila. Here we are, on the island of Panay, in a town so small hardly anyone gets international news on television or newspaper and certainly not by internet. We are in the countryside and while you and I have been friends for years now, you have told everyone here that I am your grandchild from the United States. You have told them that I am a writer in search of our family history. Your townmates think I have come to see where our people are from. To see the animals indigenous to our homeland. To pull on the leaves of these trees and know my history is rooted here with you. “She is writing our family story,” you told your former neighbors.

Except for two of your nieces who have escorted us into the church we are alone and you are whispering to me, using your eyes and your hands to indicate what happened here so long ago.

I am begging you to tell your story on camera. But you shake your head, no. I say, “But we have traveled so far.”

“I told you already,” you say.

I told her already. My name is Piedad Nobleza and I was born in Madalag, Aklan on August 2, 1920. I was married by the time the war broke out. My husband was a soldier and we had a son and a baby girl. When he left, I took the children from our house in the lowlands and moved them to a safer place. My aunt’s house was hidden high in the mountains. No people passed that way. The country was quiet and we lived in peace. Until one day, I went down the mountain to check on our house. Because we had been living isolated from any other people I did not know the Japanese had landed. When I got to my house, the guava tree branches covered the roof and tangled itself among the leaves of other trees. I spent the morning clearing the brush and cleaning up the house. I got lost in the pulling out of weeds. After awhile I stood to stretch my back. That’s when I saw them. Two Japanese soldiers.

“Don’t runaway!” they yelled in English.

I froze. Held my breath. I could not stop thinking about my children. If I run and they shoot me, what will come of them? The taller soldier was kind. He wanted to hold me. The smaller one, cruel. He kicked me, pushed me. They hurt me.

I could not walk. I was too scared.

They brought me here, to this church 50 kilometers from her house. In the church were women from different parts of the mountain, women I had never seen before.

That first night the soldiers placed two pews together. Two of them argued who would go first. The first soldier was fair, not too tall, and not too fat.

Then one morning, I woke and all was quiet. The church door was wide open. And because I slept next to the door, I was the first to step out to discover the Japanese soldiers had fled in the middle of the night.

So I went back to the house where my aunt shot me a look and did not said anything at all. When I arrived at our house, I sat in the corner, crying and crying.

Lola Piedad Nobleza, superhero. Your friends and family in Madalag think you are a seamstress. But to the rest of the world, you are an activista. A Lola. In Manila, you jet around the city with your best friends, Lolas Dolor Molina and Josefa Villamor and you fight for justice. You stand in the center of a circle and you sing songs. You march on the streets. You give your testimony to reporters and students alike. You are practically the poster lola for all “comfort women.”

But we are here, in this space. You, me, and God. And you whisper to me – we slept there, by the door. We cooked over there. That altar is new. These pews, they took us here.

“Do your grandchildren know?”

“I haven’t told them, but they know. People talk.”

“Will you tell them?”

“You have a mission.”

“And you tell the whole wide world?”

“Because it is LILA’s mission. Young girls need to know what happened.”

“So tell me now, Lola. Now that we are here, tell your story.”

And here is where you show me just how strong you are. Your lips go taut. Your face, dark. You look me in the eye.