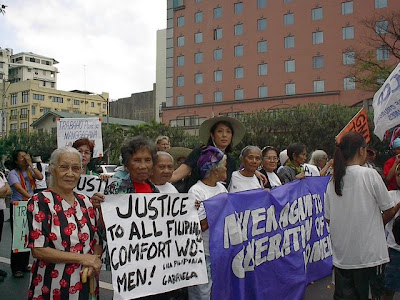 A year ago today, then Prime Minister Shinzo Abe made the great false statement, "There is not enough evidence to prove coercion." He was referring to the way the Japanese Imperial Army took over 200,000 women and girls during World War II and forced them into "Comfort Stations." He began a revolution of minds a year ago today. He gave us reason, especially those of us who have been in this fight for so long, and for the lolas and other survivors who have been in this fight to get their message into the light their whole lives, he gave us reason to stand up, to speak out and to say, "No, you are wrong."

When I heard his statement, a year ago today, I tried to stay cool. I remember coming out of a faculty meeting and one of my colleagues asked me, "So what are you going to do about it?" I told him not to get me started because if I got started, I would not stop. I got started.

So much has happened in this one year. This blog, which came out of that statement, was born. I addressed Prime Minister Abe then, I asked him to please consider the lives of the women and the fight they are in (to rescue not only their own dignity but to keep the lives of other girls, children and women living in war torn nations safe). So many of us signed the international online petition. And as I stayed awake nights, doing my best to fight this battle from Miami, my friends across the nation were doing the same thing in their home cities. There were activists on the west coast and east coast. There was Annabel Park and Eric Byler in DC. And members of the grassroots 121 Coalition began knocking on doors. In Congress we had Mike Honda and Nancy Pelosi, Eni Falemaovaega and the great late Congressman Tom Lantos, doing their best to educate their colleagues and pass House Resolution 121, a non-binding bill asking Japan to make a formal apology and to take full responsibility for these war crimes against humanity.

I started writing my own Congresswoman, Ileana Ros-Lehtinen on a weekly basis. She was the senior ranking member of the House Committee of Foreign Affairs and I desperately needed her to understand the plight of my lolas. When she rose in support of the bill last July and when the rest of Congress joined her and gave the bill a unanimous voice vote, my heart swelled.

I invite you to go through the archives of this blog. You will be amazed at the stories of human spirit and strength. So much evidence.

Japan has yet to apologize. The fight is not over. But there are so many more soldiers fighting this battle with us now. Canada has passed a similar motion. And others have written their own versions of the same plea: please say sorry, please own up to this history that is yours. The Netherlands, the European Parliament, Australia and the Philippines. Prime Minister Abe has stepped down, our dear ambassador of human rights, Congressman Tom Lantos has passed away and many of the women too have been lost in the year, but the truth has emerged. There was reason to say it and there were people willing to hear it; all because of one man's statement a year ago today, "There is not enough evidence to prove coercion."

Thank you, former Prime Minister Abe. Do you like the photo above? That is me and the evidence you were looking for, the survivors of Liga ng mga Lolang Pilipina. We are marching on Women's International Day, March 8 2001.

Anonymous said…
It has already past one year after Abe said that, eh?
I referred to your article of March 1st when introducing a Japanese musical about Tomasa Salinog who was one of the comfort women in Philippines. (I don't know how to spell her name though.She was also called Lola Masing.)
http://minnie111.blog40.fc2.com/blog-entry-804.html

It is a musical performed by more than 100 Japanese citizens. Here's the site:

Bad news is Abe has returned as a politician today again.

Anonymous said…
Though Mr Abe kept a low profile after resignation, recently he's resuming his political activities. A few days ago, he made a speech at a meeting of "MP Alliance for enactment of a new constitution," a conservative group denying value of the pacifistic constitution. You can watch him speaking here (Japanese).

In February an incident happened in Okinawa, Japan: a US Marine allegedly raped a 14-year-old girl in his car. The Marine was arrested by Japanese police, but released at last after the girl's family dropped the charge. It is said that one of the reasons is harassment of right-wing and gossip-loving media against the victim and her family; I heard a magazine detected their home and tried to interview them directly.

75% of US military bases in Japan is located in Okinawa and sexual assaults by servicemembers have been repeatedly happened around the US bases. Investigations and punishments are often inadequate under inequal treaties between Japan and US. Many Okinawans feel US military enjoys impunity, but right-wing politicians and journalists harshly criticize their claim.

The late Congressman Tom Lantos called Japanese right-wings' attack on former comfort women "a game of blame-the-victim." I see the same symptom appear in the Okinawa rape case. Right-wings and their supporters take it for granted that women and girls are sexually abused through military activities.
March 8, 2008 at 6:03 AM