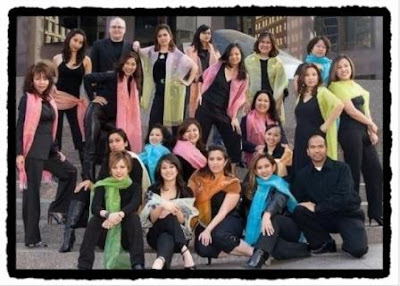 I'll be joining the casts in both NYC and SF as they fight violence against women around the world. 10% of the proceeds will be going to the lolas and this is a good great thing! Thank You, Filipina Women's Network! Below are facts about the production.

PREMIERE of A Memory, A Monologue, A Rant, and A Prayer (new play featuring Filipino men - supporters of Men Against Violence are community leaders)

What: Filipina women and men coming together in solidarity to dialogue about violence, about the Filipino community's silence and shame about domestic violence,and about ways to break the cycle of violence against Filipina women and girls through performances of Eve Ensler's Obie award-winning The Vagina Monologues, Usaping Puki (Tagalog version) and the new play - A Memory, A Monologue, A Rant and A Prayer.

MEN AGAINST VIOLENCE Workshops: A discussion about masculinity, violence in our communities and how we can be allies with women to end family violence.

Why:
- Raise awareness through theatre, popular culture and education about the high incidence of violence in Filipino homes and intimate partner relationships.
- Help Filipina women in abusive relationships take action and seek help.

Why this Campaign Matters: Engaging the Filipino community through theatre and hearing the women's stories in Tagalog "hits home" and helps us understand the broader connections of Filipino values such as respect for women, dignity, family, equality and justice to social and economic issues and to class and religion.

About A Memory, A Monologue, A Rant and A Prayer -
A groundbreaking collection of monologues by world-renowned authors and playwrights, edited by Eve Ensler and Mollie Doyle. These diverse voices have come together in a collective roar contributing original pieces and bringing their particular vision, talent and take on violence against women and girls - to break open, expose, and examine the insidiousness of violence at all levels: brutality, neglect, a punch, even a put-down.

When & Where: SAN FRANCISCO

About V-Day: A global movement to stop violence against women and girls. V-Day is a
catalyst that promotes creative events to increase awareness, raise money and revitalize the spirit of existing anti-violence organizations.

What are The Vagina Monologues?
Based on interviews with over 200 women about their memories and experiences of sexuality, The Vagina Monologues (Usaping Puki) give voice to women's deepest fears, guaranteeing that no one who watches the show will ever look at a woman's body, or think of sex, in quite the same way again. It is a celebration of female sexuality in all its complexity and mystery. In this stunning phenomenon that has swept the world, Eve Ensler gives us real women's stories of intimacy, vulnerability, and self- discovery.