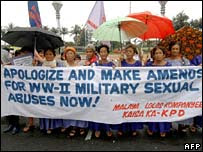 Canada's parliament has unanimously passed a motion calling on Japan to apologise for forcing some 200,000 women to serve as wartime sex slaves.

The women affected were mainly Chinese, Korean, and Filipina, but other nations have demanded Japan apologise.

In 1993 Japan issued an official apology over so-called "comfort women", but parliament never approved it.

Former Prime Minister Shinzo Abe caused uproar earlier this year when he said there was no proof of state involvement - a statement he later played down.

'FORMAL AND SINCERE'
The symbolic, non-binding Canadian motion calls on Japan to "take full responsibility for the involvement of the Japanese Imperial Forces in the system of forced prostitution".

It must offer "a formal and sincere apology expressed in the Diet to all of those who were victims".

Japan said it regretted the vote, and it would not help bilateral relations.

Similar motions have been adopted in the US and the Netherlands.

Speaking to the AFP news agency after the vote, Ms Chow said: "For me, this isn't crimes against 200,000 women. It's crimes against humanity and all of the world's citizens have a responsibility to speak out against it."

"Fifteen-year-old young girls were subjected to torture and raped by countless men for weeks, months and years on end," she added.

OLD WOUNDS
The comfort women were forced into brothels for Japanese soldiers in the 1930s and during World War II.

Japan's failure to apologise and issue official compensation remains an irritant in relations with the nations affected.

In South Korea, surviving "comfort women" still demonstrate every Wednesday outside the Japanese embassy in Seoul. Many did not reveal their involvement for decades out of a sense of shame.

Japan set up a private compensation fund in 1995 as a way of offering recompense without officially acknowledging wrong.

But many women have rejected the offer, saying it should come from the government itself. 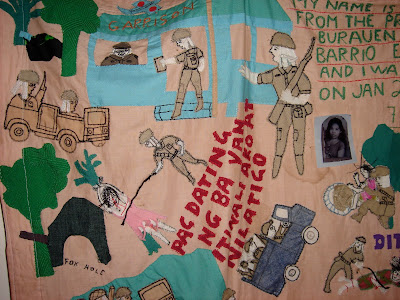 The Tapestry of Lola Remedios Felias


The sun streams in through the wall-sized window, casting afternoon light on our family room. Outside the trees sway vibrant and green, shade a small figure of Mama Mary. She welcomes me too with arms stretched and hands waiting. Inside, noise percolates from every room of the house. I am home. From my suitcase I pull a salmon colored tapestry. When you first glance at it, the greens, blues and reds flash a beautiful montage of color. The folds unwind and reveal the fine embroidery.

I’m telling my mother and sister-in-law that when Lola Remedios learned I was coming, she began working on this piece as gift to me. It took her all six months to get this far in the tapestry. Every piece – every letter and image has been cut from other fabrics and painstakingly hand-sewn into the cloth. Except for the missing D where she has sewn, “(D)ecember 20, 1942, Dito Ako Nahuli Sa Lugar ng Baryo Esperanza,” it’s all there – the Dagitan River, green…