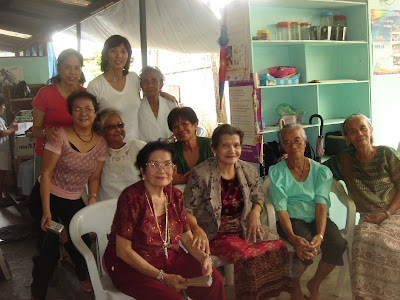 I brought the lolas many gifts during the month of July. Among the gifts were letters of support written by many community members in the United States. People of diverse backgrounds and nationalities touched them -- but especially people from Filipino American communities in the Bay Area and all over Florida.

I gave them that green journal and they read all the messages of love, admiration and support and their eyes were bright. They told me they were so happy to see that people understood what they've been saying and that it is clear that people are open to understanding the experiences they had during World War II.

Your kind words helped to lighten their load.

Another gift was the development of House Res. 121 and the growing support the bill has had in New York, Washington, Los Angeles, Miami, San Francisco and Orlando, and also in Congress. To date we have 167 co-sponsors. 168 counting Mike Honda. When we began to truly campaign in Florida in June, there was one out of 25 Congressmen and women who co-sponsored House Res. 121. Now there are seven: Congresspersons Alcee Hastings, Alan Boyd, Ileana Ros Lehtinen, Debbie Wasserman Schulz, Robert Wexler, Jeff Miller and Ginny Brown-Waite (thank you!). We're hoping others from this Florida delegation join them.

This growing support in the House of Representatives inspired the Lolas to send their own message to Congress. Here is a version of what they said. It's much shorter than the actual interviews and conversations we had. A longer version is still being cut together. But for now, you can witness the lolas, now in their eighties and nineties, thanking their supporters.

Remember that you can also be a supporter -- a Friend of the Lolas. Write LILA Pilipina Executive Director Rechie Extremadura at kuyangateng@yahoo.com or write me, M. Evelina Galang -- labanmgalola@yahoo.com to find out more about Friends of the Lolas.