Lola Lucia Alvarez: An excerpt from "Her Name Means Light" 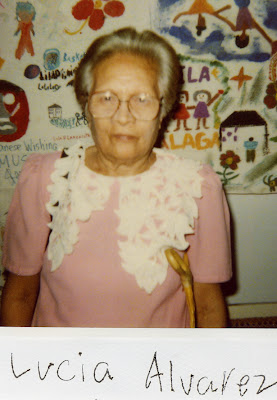 I watch a tape that was shot two months after we had met Lola Lucia in 1999. She had just come back from the beauty parlor with her haircut and styled, pulled off her face, a face that was clean and smooth and bore wrinkles so fine they were nearly nonexistent. During our stay, they had kept her busy, and she was unable to participate in all the events fully. She’d begin a painting, and then be called to run to the post office. She’d walk into the gates of Lolas’ House and see a drama going on and would be pulled into the middle of it, not really understanding what we were doing. She’d play the part of a soldier or a comfort girl. She’d play the part of a husband or a boyfriend. She’d play each role the same way, hiding behind her toothless grin, giggling.

In the tapes, Lola Lucia talks about the way her body reacted to that month long series of abuse. As she demonstrates the way they tied her arm up in a sling, her hand takes hold of her right shoulder and grips it throughout her testimony. Without thinking about it, her body takes on the past.

I can’t imagine sitting in a room, my body exposed and left dirty for one week, an arm swollen and wrapped tight around my body. I can’t imagine waiting in this timeless space where hours and days are marked by soldiers coming and going, assaulting me with their words, with their cigarettes, with their bodies. What did she see in the reflections of the mirror? When she looked down at her feet? What did it feel like to be caged when you were just a sixteen-year-old girl, learning to be a woman?

When she gets to the part where she’s finally out of the garrison, roaming the seaside in search of a boat to take her to the other side, her body relaxes in the chair. She lets go of her shoulder and begins to use both hands to gesture her story to life. She pulls the edge of her skirt to her face and wipes her brow from perspiration, giggling.

When she describes the people who found her, her face emits a soft glow. She smiles at me and taps the top of my legs. “They took pity on me.” I imagine myself, a mother coming home from the market, falling upon this teenager by the water -- her dirt covered her body, her dress tattered and full of blood. I see her standing there with a smelly old rag holding up her infected arm. I wait for her to speak and all I hear is her breath slowly filling up an unfed belly, releasing in heavy sighs. I look into her eyes and I see they are the color of fear. I imagine that I would want to put my arms around such a girl and hold her, let her cry.

“Sige ang iyak ako.” I cried continuously. “Kasi hindi ko kaya.” I couldn’t take it. “Hindi ko tinatese.” I couldn’t bare it. The pain in her arms and back stayed with her from the minute she fell on the stone and broke her elbow joint in 1944, to her very last moments at San Juan de Dios Hospital in Pasay City in 1999.

I have been flipping through my photos, holding tight to every photo I have of Lola Lucia. Her self-portrait sits next to me even now. Of course it looks nothing like her. It’s an ink drawing, a stick figure. But then, even her soft body and sweet face were deceiving. She was more complicated than that. When I imagine her running up and down the streets of Quezon City, an envelope under one arm, a kerchief wiping her brow, I see that none of us saw her as she really was.

What you see is not what you get. She let the others, the ones with a flare for drama and colors like red and hot pink, chartreuse and cannery yellow, stand in the center and radiate light. Lola Lucia went about her business, glowing softly everywhere she went. Her name means light. While other lolas were apt to do what in the Philippines they call O. A. -- over act -- she was happier going behind the scenes, picking things up, dropping them off, giggling to herself. She looked like she had nothing to say, she was an activist, a doer. Those Japanese soldiers thought they had hauled in a virgin – something sweet, inexperienced, fresh. But she was a wife and a mother. Lucia Alvarez was a grown woman who knew better than to test her captors while they stripped her of her clothing, and raped her over and over again. She knew she had a choice, to stay quiet and live, or to resist and feel the bullet coursing through her body, ending it all right there. She chose to be quiet. She chose to settle things afterwards and in her own way.


At this moment 1628 people signed the petition to support House Res. 121. There are six days until Abe arrives in the United States, six days to get 2000 names. Please sign. Please spread the word. Please write Congress. 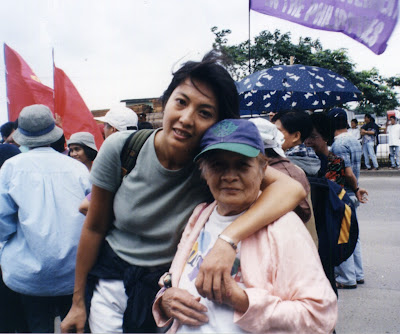