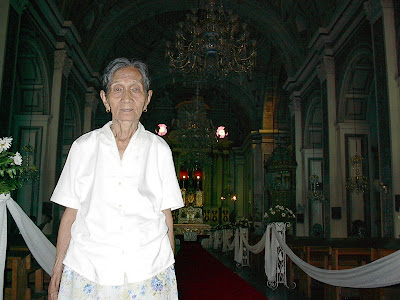 Above is photograph of Lola Josefa Villamore standing in the space of her former garrison, San Augstin Church near Santa Rosa College in Manila.

The international petition to support House Resolution 121 has grown and 1253 private citizens from the U.S., Canada, Japan, Thailand, France, Australia, The Netherlands, Italy, The Philippines, China, Sweden, England, India and other nations have signed. Mostly supporters of the 200,000 Comfort Women have signed the petition, but survivors too have signed. It is an amazing document of human compassion and a clear cry for justice. You need only read the comments left to see how urgent the plea.

In three weeks Prime Minister Shinzo Abe will be in the United States — April 26-27 — and the House Committee on Foreign Affairs has informed me that they are going to wait to take action on the issue until then. Please join me in the campaign to gather more signatures. Imagine a document that had a living name for every woman that suffered during WWII. 200,000. Imagine making the effort and not reaching that daunting number. Imagine the statement that would make.

Please ask your friends, your family and your colleagues to think about their own families and to imagine a war where their own daughters, sisters, wives and mothers are abducted and subjected to the same systematic rape and enslavement. Let us make sure the world knows we are making every effort to stop those actions from ever occurring again.

With great respect for the work you are all doing --