April 26, 2007
Tearful recounting of women being forced into sexula slavery comes in face of PM's Denial of Tokyo's Role 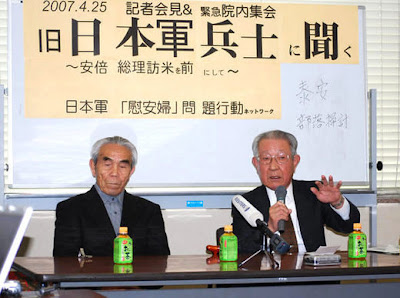 "I wasn’t aware of it. I didn’t feel guilty at that time. Tens of thousands of women had been forced to do such a horrible thing because of war...I just wept after watching the movie. I believe they were coerced into a cruel fate. I would like to make a deep and unambiguous apology to the women."

These were the words of a former Japanese soldier after seeing a film about the lives of former so-called comfort women, forced into sexual slavery for the Japanese military during World War II.

On April 25, a Japanese civic organization, the Action Network for the Issue of Comfort Women by the Japanese Military, held a hastily-arranged press conference at a parliamentary office at a meeting room in the Japanese Diet in Tokyo, one day before Japanese prime minister Shinzo Abe’s travels to the United States. During the press conference, the civic group showed a film depicting Korean, Chinese, and Taiwanese women who had been forced by Japan’s Imperial government to serve in Japanese military brothels during World War II.

After watching the film, former Japanese soldier Ichiro Koyama, 87, took the podium to talk about the atrocities.

Koyama said that given the circumstances at the time, it was certain the women were forcefully moved to the brothels by the Japanese military. When he talked to four Korean women at a military brothel on the front lines in China, asking why they worked there, the women replied that they were being forced to, he recalled.

"I think they were forced to serve in the brothels," Koyama said. In addition, nearly all 15-member Japanese military squads each had four to five sex slaves, he said.

His frank testimony stood in stark comparison to Prime Minister Abe’s apology a few days back, which came after severe international pressure after he suggesting in early March that there is no proof that the Japanese military forced women into the brothels.

Another former Japanese soldier, a 87-year-old Kiyoshi Sakakura, who said he was a member of a Japanese unit that murdered, raped, and tortured Chinese civilians for five years beginning in 1940, according to him, also told his story. When he entered into a military brothel in China’s Shandong Province at the time, he saw a 14-year-old Korean girl there. As the girl wept, saying she was scared, Sakakura said he just left the brothel.

"Abe denied the fact that the comfort women were forced into sexual slavery, because he doesn’t know the history. He should apologize fully, from his heart," he added.