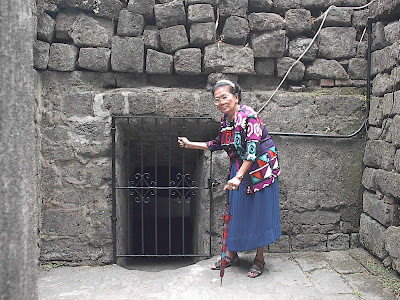 Here is Lola Ashang's testimony. It is an English translation of the testimony she gave to the Japanese government and has been published in War Crimes on Asian Women: Military Sexual Slavery by Japan During World War II (Asian Women Rights Council, 1998).

The photographs were taken in May of 2001 at Fort Santiago, Intramuros in Manila. We walked among tourists, but for Lola Ashang it was anything but a light afternoon stroll.

In the photograph before the gate, she is showing us where the soldiers would discard the dead. She believes her first husband was thrown to the sea here.

We were brought to the Spanish quarters in Fort Santiago in Intramuros. There, I witnessed the torture my husband underwent. We were put in a cell where my husband was stripped naked, hanged upside-down and beaten with a 2X2 stick. And then, his head was shaved with a blade, scalp included. Blood was trickling down his face. His hands were also fitted in with steel between his fingers and then was pressed, this made the bones in his fingers crack. To add, his fingernails were pulled one by one. These were all done in front of me. It was as much torture to me as it was for my husband. I could not forget this incident up to this day.

My husband was placed in another cell and I did not know what happened to him after that. I just know from a Filipino janitor that they had killed him along with other prisoners.

My sexual ordeal started a month after we were taken. The commanding officer, whose name I remember as Mr. Fukishima, went to my cell and took me out to his room. There he used me. After that, he brought me back to my cell. A few hours after, another soldier came to get me and brought me to a small room with a cot and there I was raped again. The soldier then brought me back to my cell after the act. Days after, three to four soldiers will get me in my cell and bring me to the same small room waiting for each other's turn to use me. I stayed in Fort Santiago as a prisoner for 6 or 7 months. For five months, sexual molestation was repeated several times by three or more soldiers three times a week as a means to "comfort" them ... 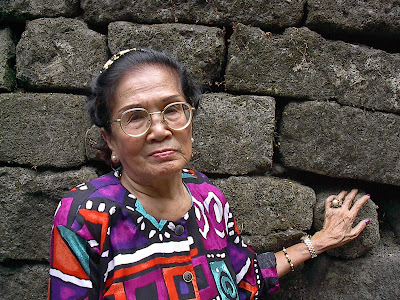