Legislation in the Filipino parliament was derailed and the government has deferred to Japan by never giving the women the recognition and support they deserve. Filipino boys were also used in the Comfort System. Despite memoirs and witnesses, this issue has never been even discussed.  Osaka Mayor's Remarks on "comfort Women" Enrage Group in Philippines 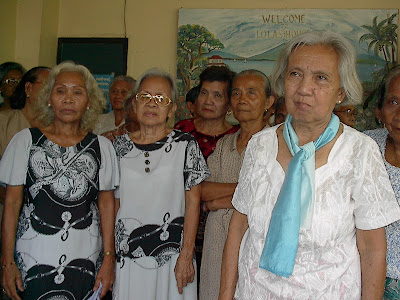 Manila, May 15 Kyodo -- Two groups of "comfort women" in the Philippines expressed rage Wednesday at the statement of Osaka Mayor Toru Hashimoto about sexual servitude being necessary for Japanese soldiers during World War II.

The Lila Pilipina (League for Filipino Grandmothers) and Malaya Lolas (Free Grandmothers), who have a combined membership of 142 surviving victims of sexual slavery during wartime in the Philippines, said Hashimoto should apologize for justifying the wrongdoings of the Japanese military.

Hashimoto said Monday that sexual servitude by women in Asia was necessary for Japanese soldiers during wartime to maintain discipline in the military.

"I am afraid with Hashimoto's statement. I don't think the Japanese people should trust him if he has that opinion.

How can the Japanese people occupy a friendly space in the international community and promote brotherhood with that opinion?" Richilda Extremadura, president of Lila Pilipina, told Kyodo News.

"His statement is a manifestation of his view that any method can and should be used in times of war. That saddens and enrages us. I can't believe that a man in his position can still think that way at this time. The women are already old, why can't he think about them?" she said.

Isabelita Vinuya, 81, a victim of Japanese abuses in Pampanga Province who is now president of Malaya Lolas, said Hashimoto's statement "degraded us further because it means it is the job and obligation of women to allow themselves to be raped by the Japanese soldiers." "Does he mean the women are needed for their wrongdoings? That is not right. That is not acceptable. What are women to him? The Philippines, when it took part in the war, did not include women in any pervert acts, because that is not right," Vinuya told Kyodo News in a separate interview.

Extremadura and Vinuya said they are both saddened by Hashimoto's statement because it runs counter to what they are demanding from the Japanese government.

"Instead of justifying what his government did during World War II, he should be realizing at this stage that what they did was wrong. The first thing they should have done is to accept that fact because many comfort women are already dying, and many have died, without getting justice. They should be responsible and held accountable for that crime," Extremadura said.

She said that instead of justifying the "military culture of needing women," Hashimoto, being in government, could just have used his position and power to discuss his government's accountability and come up with a state policy on the issue.

"It's not very diplomatic for him to say that. He is the mayor of Osaka. What if he goes to a higher position in government? Will he still contend that the military should be provided with women? Our position is that nobody has the right to use and violate women in any circumstances," Extremadura said. "We really want justice for the grandmothers because we also want to put an end to the military culture of needing women." The two women said the Philippine government should also seek a formal apology from Hashimoto and condemn his statement.


"If this is a responsible government, it should represent the cause of its own citizens," Extremadura said even as she lamented how the Philippine government has not been supporting their battle.

"Hearing Hashimoto's statement makes me sadder because we have been fighting our cause without any support from the Philippine government.

But still, I am appealing on our government to denounce Hashimoto's statement," Vinuya said as she expressed envy of the comfort women in South Korea, who, she said, are enjoying full support from their government.

"How can abuses against Filipino women all over the world stop if the Philippine government cannot even fight for us who have long been in this struggle?" she asked.

Foreign affairs department spokesman Raul Hernandez said, "The Philippines reiterates the importance of adhering to the language and tone of the Kono Statement of 1993 and of former Japanese Prime Minister Junichiro Koizumi's 2002 letter to Filipino comfort women." In his letter, Koizumi extended his "most sincere apologies and remorse" to the "comfort women," and wrote, "We must not evade the weight of the past, nor should we evade our responsibilities for the future." "The Philippine government has always urged Japanese authorities to be more circumspect in their public statements relating to this issue, as they strike at the core of the feelings and sensitivities of those who experienced great suffering during World War II," Hernandez said.

The two organizations have been asking the Philippine government to back their demand from the Japanese government for formal apologies and legal compensation.

But they claim their pleas always fall on deaf ears, the last pair that of President Benigno Aquino, who, up to this time, still has to present the result of an order he gave to Philippine ambassador to Japan Manuel Lopez in 2010 about studying "a compromise" on the demands of the war victims "that is acceptable to all parties." The organizations have refused to accept the statements of apologies made by Japanese officials over the years because, for them, they do not come with an admission of the crime that was committed.

Compensation made through the Asia Women's Fund, a Japanese government-initiated private relief foundation, was also rejected by some comfort women, saying it did not directly come from the government.