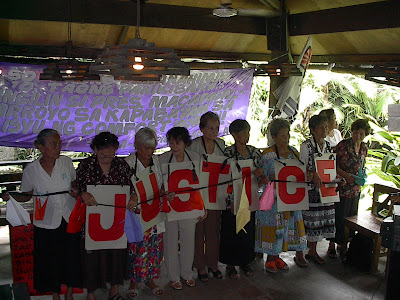 I spent most of 2002 with the lolas of LILA Pilipina during my Fulbright. I got to, as Barack Obama would say, got to know their stories. That year I spent with them is captured in these images. The photos in this montage show the women of LILA six years ago and most of them are of the protests, rallies and campaigns they have participated in in their fight for justice. They are still waiting for that official apology from the government of Japan. Despite the numerous international resolutions from governments everywhere, Japan has remained reticent. Most of the women in these images have passed on and I can guarantee that they are still fighting for justice, for peace, for women everywhere, but not from here. When you get to know their stories, you see they are simply women, grandmothers, mothers, sisters. They are human. And if you know their stories, you will love them as your own. This year, I am sitting down to write their stories. I have made a promise to the lolas to fight for them in my own way, to educate others about their plight, their stories so that it may not occur again. As they would say, Never again. Their stories carry many wise teachings and from them we come to understand the meaning of war, of self-respect and of love and forgiveness. I share these images with you now, as I am writing, so that you may think of them now in their late eighties and nineties. Still fighting for justice as they are still cooking for their loved ones, still running their households, still dreaming of peace. And if you feel so moved, take a look at the sidebar and write down the address to their new space. Write them a letter. Offer your support. I'm sure they'd love to have you as one of the Friends of Lolas.

PS: The traditional love song "Dahil Sayo" (Because of You) is performed by Charmaine Clamor, Freeman Records. Charmaine is an amazing singer and warrior woman herself. Thanks for letting us use your song, Charmaine!

Ken R said…
The Philippine had a terrible crime commited against them by the Japanese military of WWII.

This story must be told and retold so it will never be forgotten as those who suffered are no longer able to tell their stories or seek present justice.

Anonymous said…
I just found out today that you linked one of my pages.

Whispers from a Bamboo said…
you are amazing. I love your book, Her Wild American Self. I initially learned about Laban for Lolos years ago. I'm glad to have found your blog. I'll be following your writings.

hdfh said…
just wondering what will happen once all of the lolas disappear. This is probably what the Japanese government is waiting for. They believe that they will outlast the protesters. What then?
December 7, 2008 at 7:37 PM 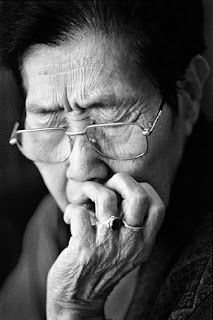