V-Day for the Lolas in NYC 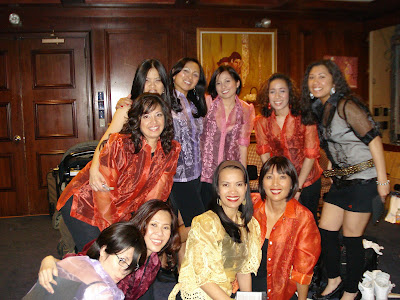 Here are some photographs of the production of THE VAGINA MONOLOGUES in NYC. The women are Filipina Women's Network members and they are not professional actors, rather they are professional anti-violence advocates. They put in so many hours and so many weeks to raise awareness about your plight and the plight of surviving Katrina Warriors, women in New Orleans who suffered after Hurricane Katrina washed their lives away with baha.

Remember when Eve Ensler came to visit you, back in 2001? Nandoon din ako. She saw you at Lolas' House in the morning and I came later that day. You told me all about the way she interviewed you about your puki. How you all giggled when she asked you if you had ever had pleasure during intercourse. Of course, that's not exactly how your conversation with her went. I know you've given lots of interviews, but probably none like that. None about sensuality and sexuality and none about discovering the pleasure of the body: kasi lolas kayo, at seguro that's not usually what people want to know from you. They want to know your stories, they want to know what happened during WWII. Rape isn't the same as sex and its the antithesis of love making. But I wonder how often we realize how deep the affect of those rapes during WWII affected your love lives, the way you hold a man, or feel your own body, the way you think about sex at all. Too often we think about the past and are not conscious of what it has done to your present perceptions of your own bodies.

So anyway, that interview, that time she asked Lola Narcisa to explain what happened back then, so we could understand what happens now, in your fight, in your quest for justice and in the bedroom. The audience watched a clip from that film, listened to the giggling and the way you uttered puki. And after that lightness was gone, they got serious when they heard Lola Narcisa explain what happened to you then and what your rallies are about now.

The first time I saw that clip was when we ran the production of VAGINA MONOLOGUES in San Francisco. I was squatting on the stage, looking up at your familiar faces. I saw so many of you -- Lola Urduja, Lola Precilla, Lola Remedios, Lola Cristeta -- so many that I might list here and now -- so many smiling faces, serious faces, living and breathing there in 2001. After the clip, I was so moved because of the some thirty of you on that clip, all but 15 of you are gone. All but a small handful and even that handful has weak members -- in your late 80's and 90's you have good days and bad days -- your bodies give out too often now. Sometimes your minds too.

The audience fell in love with you all -- how could they not -- they were moved by you. And then I told them, many of the women you saw up there -- wala na at walapang justice -- are gone now and no justice, still no justice. The directors cast me in your monologue, "Say It for the Comfort Women." You know these days, I am asked to speak about your stories and there is no hesitation on my part when I do. So I didn't think anything of it. But at rehearsal, when I read these lines, and I put myself in that woman's voice, her experience, I trembled. I could not get through the manuscript. I cried. I could not get through the manuscript. As close as I am to your stories, I cannot stand in your shoes. No one ever will. I cannot begin to imagine it. But come the night of the performance, I placed a shield around my heart and I took off my shoes and I read your part. I did it. I read it for you. Like the piece says, "Say it for the Comfort Women." No tears, but no shield around the heart either. Impossible.

Anway, the great thing about these productions is that they have chosen you to be one of their beneficiaries, and these great hearts will be sending funds your way soon. Marily Mondejar, president of FWN, was so excited to tell me they had chosen you to benefit from their work. I know you need the help too. I know your funding is dwindling and there is so much to tend to -- the rent at Lolas' House, the food and transportation for the lolas, the electricity and phone -- and that's just for the operation of your space. There is still your campaign for justice, the travels to Japan and other places where you must go, no matter how old or tired, to make your stories known.

Don't worry lolas, we are praying for you. We are here for you. Laban mga lola! 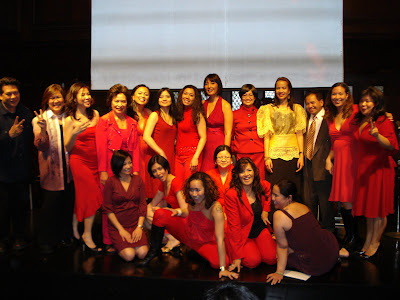