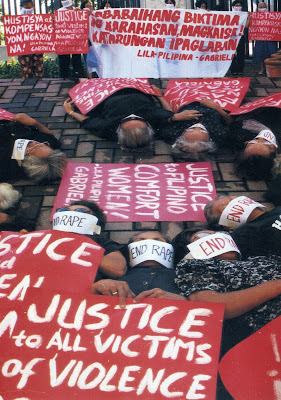 FROM: LILA PILIPINA and GABRIELA
For Immediate Release
March 5, 2008

The elderly women of Lila Pilipina, organization of former comfort women in the Philippines together with the militant women's group GABRIELA held a picket in front of the Japanese Embassy this morning as part of the Global Action Seeking Justice for Comfort Women.

"None can be a greater tragedy than to be denied justice half a century after being abused and violated," said Rechilda Extremadura, executive director of Lila Pilipina. referring to the elderly women victims of sexual slavery by Japanese Imperial Army during World War II.

Extremadura added that while the Japanese government has yet to give justice, they also hold the Philippine government accountable for the continued denial of justice for the elderly women. "Prior to People Power 2, Gloria Macapagal-Arroyo promised to take up the issue of Filipino comfort women but she failed to deliver just as she failed to fulfill all her other promises to the people."

"The military abuses borne of the military culture of sexism and violence that drove them to commit sexual violence against women in WW2 continue to this day,” said Emmi de Jesus, secretary general of GABRIELA. De Jesus cited the recent case of sexual assault of a Filipina by a US serviceman stationed in Okinawa, Japan following the rape of a 14-year-old Japanese girl by a US Marine.

“By continuing to turn a blind eye on the violence committed against its women by foreign troops, whether recent or in the past and by perpetuating immense poverty that drives Filipinas into foreign lands, the Philippine government serves as accomplice in the sexual abuse of Filipinas everywhere," added de Jesus.

“For as long as the military of the superpowers deem themselves superior might over sovereign nations and peoples, for as long there are imperialist wars that seek to undermine the independence of a nation for plunder of their resources, peoples will be subjugated and women will be exploited and abused,” added de Jesus.

On March 8 International Women's Day, Lila Pilipina will be joining GABRIELA in the national women's action against Arroyo. “Pres. Arroyo lied to the elderly women of Lila Pilipina and abandoned the cause Filipino comfort women. For this, Lila Pilipina joins the growing number of women wanting her out of Malacañang."
###