Open Statement from the GABNet 3 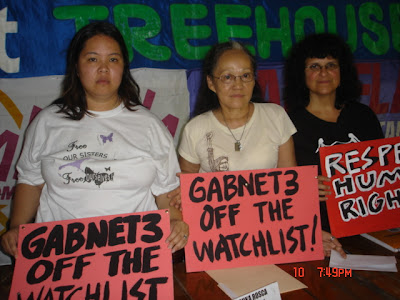 On August 5, 2007, agents of the Philippine government prevented one of us from boarding her return flight to the United States. The reason given was that she was on a nebulous "watchlist" and needed clearance from various and diverse Philippine government agencies. We would learn, subsequently, that two of the GABNet members visiting the Philippines – International Relations Officer Judith Mirkinson and nternational Spokesperson of the GABRIELA Purple Rose Campaign Against Sex trafficking of Filipinas Ninotchka Rosca -- were also on the watchlist, which contained over 500 names.

Considering the surrealistic situation we find ourselves in, where no one seems to be able to explain the nature of this "watchlist," the basis for being included in the "watchlist," and what the process is for getting "cleared" and off the list, even of who is actually responsible for the list, we would not be surprised if the list included imaginary men and women.

We would probably have looked at this experience as some kind of Harry Potter adventure, were it not for the perilous state of human rights in the Philippines, where some 90 women activists, organizers and leaders have been assassinated out of a total of nearly a thousand murdered, and where the second highest number of writers and media people have been killed in the world today. We are constrained to view with deep alarm the impunity with which the Philippine government has violated Dr. Enrile's civil and human rights, and the naked shamelessness with which it threatens to violate the civil and human rights of Ms. Mirkinson and Ms. Rosca, as well as various and diverse people on the so-called "watchlist," "blacklist" and "holdlist."

We are absolutely sure we are under attack because of our work as members of the US-Philippine women's solidarity mass organization GABRIELA Network which has consistently upheld militant sisterhood with GABRIELA Philippines for 18 years and with the Gabriela Women's Party since the latter's formation. We are absolutely certain that this violation of our civil and political rights is occasioned by our work in organizing women and women of Philippine ancestry; by our decade-long work against the traffic of Filipinas; and by our commitment to the securing of basic rights and the expansion of freedoms for all women, especially the women of the Philippines, as well as for the nation as a whole.

Because of this track record, certain personalities in the Philippine government have chosen to express their hatred of women and of freedom by violating and seeking to violate our human rights. We say to them, as well as pledge to those who support and continue to support us, that harassment and intimidation will fail. For far too long have working women been disempowered, dispossessed and reified. Not even by a single second will intimidation, harassment and human rights violations cause us to cease our work on behalf of the emancipation of womankind.

We are deeply moved that our particular case has found resonance among peoples and organizations the world over. We thank GABRIELA Philippines, Gabriela Women's Party and most of all, our heart-sisters in GABRIELA Network for the support, outrage and clamor on our behalf. We thank ANSWER, friends in the National Lawyers Guild, the National Alliance of Philippine Women in Canada, Justice for Filipino-American Veterans, BAYAN Philippines, Pacific-Asian and North American Asian Women in Theology and Ministry, and others too numerous to name, for their support. Our most profound gratitude goes to individuals and organizations who approached this issue with respect for our persons, our situation and our work.

We wish to assure everyone we will continue to seek redress of our grievance and to assert our civil, political, human and women's rights. --###