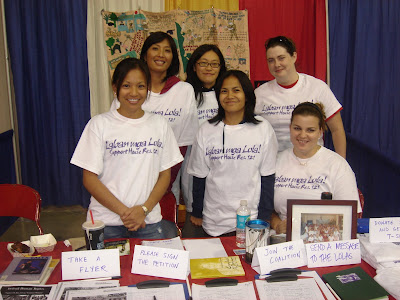 
The UM 121 Coalition Chapter road-tripped to West Palm Beach and Orlando this past weekend, setting up booths complete with posters, books and Lola Remedios' autobiographical mural.

The goal was to raise awareness among the Filipino American community of Florida, sharing experiences of all surviving WW2 "Comfort Women" and in particular, the experiences of more than 1000 young Filipinas taken hostage and enslaved by the Japanese Imperial Army during Japan's WW2 occupation in the Philippines. 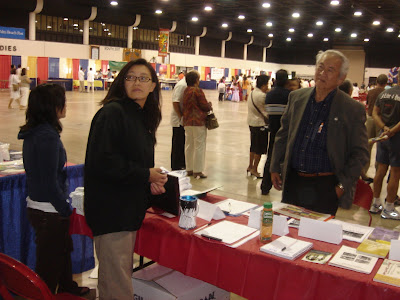 (above: UM 121 volunteers Elaine Ruda and Professor Rita Wong speak with community leader Dr. Pio Sian. He himself recruited many signatures for the petition to support H. Res. 121.)

UM 121 Coalition circulated a petition from the Florida Filipino American community and their friends. The petition addresses Florida's 25 Congressmen and women and asks them to support House Resolution 121.

Currently, House Resolution 121 has 132 Congressional co-sponsors, but only Congressman Alcee Hastings from Florida co-sponsors the bill. UM 121 hopes to outreach to all Floridian constituents and ask them to write their representative. 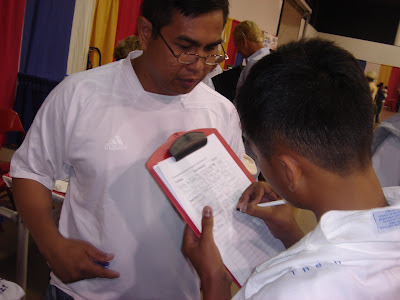 Over the weekend, with the help of several inspired community members, UM 121 gathered 500 signatures from the community attending Philippine Independence Day celebrations. In Orlando, three sisters donned Laban for the Lolas t-shirts and armed with clipboards and flyers, lobbied for the aging lolas. They must have retrieved fifty signatures alone. At the end of the day, the girls wrote the following message to the lolas:

Hi Lolas!
I'm sorry that I don't know Tagalog that well! I hope the few signatures my little sisters and I collected helped.
From (and God bless you!) Panganay Ate Gem-Gem, age 13
P.S. Salamat po for standing up against the WWII Japan soldiers.


Dear Lolas,
Thanks for standing up during the war! Many people helped and signed the petition. You are well appreciated.
love,
Gabbie (age 10) 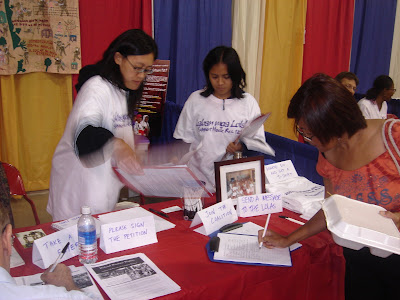 In West Palm Beach, a young American in his early thirties determined to make his mind known, deliberately walked to the center of the booth and signed the petition. Then looking across the table, he picked up the pen and wrote the following letter:

In the town of Tay Tay, in 1982, I first experienced the horrific remnants of the Japanese occupation of Luzon. I spoke with an elderly woman who had been imprisoned near Antipolo. She no longer had her nose, eyes or ears. Later my father explained that she was tortured for helping to fight the Japanese.

I will never forget the woman or the delicious pan de sal that she somehow was able to bake. The weekend was a great success and just the beginning to a new awareness in the stae of Florida. House Resolution 121 is not about the past, it is about the present and the future. It is about human rights and what we consider honorable behavior. House Resolution 121 is an opportunity to heal and to reconcile and the UM Chapter of 121 Coalition hopes you will support this measure too.

The following text is the petition to the 25 representatives of the state of Florida. If other communities are interested in circulating a similar text, email labanmgalola@yahoo.com and I can send you the documents:

House Resolution 121: Expressing the sense of the House of Representatives that the Government of Japan should formally acknowledge, apologize, and accept historical responsibility in a clear and unequivocal manner for its Imperial Armed Force's coercion of young women into sexual slavery, known to the world as "comfort women", during its colonial and wartime occupation of Asia and the Pacific Islands from the 1930s through the duration of World War II.
Sponsor: Rep Honda, Michael M. [CA-15] (introduced 1/31/2007)

We are the Filipino American Community of the state of Florida and we are writing to you to ask you to support House Resolution 121.

During WW2 the Japanese Imperial Army wreaked havoc on the Philippines. Many Filipino Veterans fought for the United States Army and died in battle or were injured for life. But Filipino soldiers who fought side by side with American military are not our only WW2 casualties. Over 1000 women and girls, usually between the ages of eight and twenty were abducted and forced into Japanese “Comfort Stations” where they were subjected to systematic rape and enslavement.

For example, seventeen-year-old Pilar Frias had two bouts with the Japanese soldiers before she was taken captive in the province of Bicol. After raping her five times, soldiers tied her at the waist and dragged her along with three other girls. Strung together by hemp rope, the four girls were raped every night, five times a night, a different soldier every time.

Many of those 1000 girls and women like Pilar Frias have suffered the trauma of WW2 for their entire lives – their bodies, their minds and their spirits have never fully recovered.

We are a community that respects our elders and takes great pride in the spirit of family. It is time to take care of a generation of Filipinos who suffered a war that was not theirs.

House Resolution 121 is a resolution about human rights, about respect and justice. It is a statement that encourages Japan to take full responsibility for these war crimes and to make a full and unequivocal formal apology to the 200,000 women and girls of Asia who suffered these atrocities. Of these women 1000 of them are our ancestors, our mothers and grandmothers of the Philippines and it is our belief that these women deserve some peace of mind. It is our belief that taking a stand against these war crimes sends a clear message to everyone that this behavior is intolerable, inhumane and unjust.

As your constituents of the state of Florida, we the undersigned urge you to support House Resolution 121.