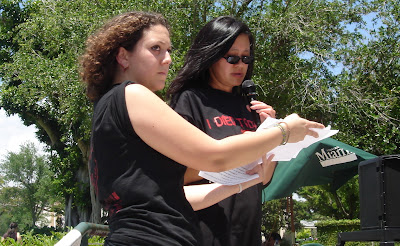 June 6, 2007 (MIAMI, FL): The University of Miami Chapter of the national 121 Coalition will be hosting events June 9-27 to increase awareness and enlist support for House Resolution 121 — a resolution introduced by Congressman Mike Honda (D-CA) that calls upon the Japanese government to apologize for rape camps that enslaved over 200,000 girls and women during WWII. Primarily girls under 18, some as young as eight, the so-called “Comfort Women” were subjected to systematic rape and enslavement at “Comfort Stations” set up in Korea, China, Indonesia, the Philippines, and Taiwan. Because most of the survivors are in their 80’s, this may be the last chance for Congress to act before they pass away. Public readings of sworn testimonies from survivors will be presented as part of Philippine Independence Day celebrations, offering 85,000 Filipino Americans in Florida a chance to recognize the courage of Filipino “comfort women” and advocate for House Resolution 121.

Currently, the resolution has 132 Congressional co-sponsors, but none from the Florida delegation. Amberly Reynolds, a UM student who lives in Rep. Ileana Ros-Lehtinen’s district in Miami, is urging her representative to co-sponsor the resolution. “As the senior Republican on the House Committee on Foreign Affairs, Ros-Lehtinen has great influence on the fate of this resolution,” Reynolds said. “It’s our job to let her know that her constituents are looking to her for leadership.”

The University of Miami’s 121 Coalition will be presenting English translations of “Comfort Women” testimonies at the following events:

University of Miami professor and novelist M. Evelina Galang has conducted extensive interviews with “Comfort Women” survivors in Manila. “For 50 years they were silent, and now they have come forward with great strength and dignity. It is important that the international community hears their stories and responds before it is too late. We are hoping that Rep. Ros-Lehtinen and all Florida Congress people take this opportunity to exercise bipartisan cooperation in the name of human rights, women’s rights, truth and reconciliation.”

The 121 Coalition is a national human rights group representing nearly 200 civic organizations. Galang has set up a blog with video clips of women’s testimonies as well as resources from around the world, at www.labanforthelolas.blogspot.com.