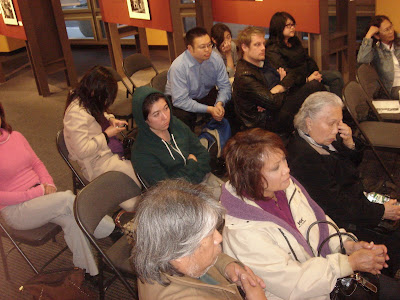 Annabel Park and I were running all over the Bay Area this week, sharing stories of the lolas with the Filipino American Community. We would introduce the subject and screen the mini-documentary of Lola Dolor and then students from San Francisco State University would read survivors' testimonies. Our final event was in the historical site were the International Hotel, a hotel for Chinese and Filipino immigrants, once stood.

At the Manila Town Heritage Center, a small but powerful group came together to share the testimonies of surviving Filipina "Comfort Women" on Thursday, May 17, 2007.

All week long, it moved me to watch the faces of the youth and the adults who had never imagined their lolas' in the same position as Lola Dolor or Lola Prescilla, or Lola Christeta. Yet, as the stories unfolded many of the people we talked to all over the Bay Area, especially the students at City College and San Francisco State, began to share the memories of their grandmothers.

We encountered more than one family member whose mother or grandmother or great aunt was also a survivor of the Japanese Imperial Army's rape camps. 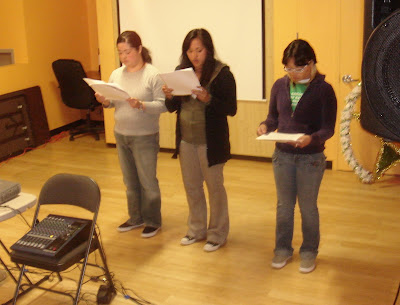 Those U.S. families with ancestors who survived Japanese "Comfort Stations" can really do something to support their lolas, their aunties and their mothers -- especially if the descendants are living in the 12th and 8th districts in California. You can write Congressman Lantos. You can write House Speaker Pelosi.

During a visit to Congressman Lantos' district office, Evelyn Szelenyi, District Director told us that hand written letters from voters in Lantos' district are the most effective tool they have to pass H.R. 121. "One letter," she said, "is like 100 voices. One phone is like 10."

Your words matter. Your Congress person will listen. It takes two seconds to write a short note expressing your concern. That one letter, imagine, is as good as 100 voices. Let yours be the one to move Congressman Lantos or House Speaker Pelosi.

So important are those letters that while I was in the Bay Area speaking, I told each crowd that I would personally hand deliver their letters to the district offices. In all we gathered about 120 letters for both offices. 1200 voices revealed their need to see justice for the surviving "Comfort Women" and their families.

Think about it, if there were 200,000 women and girls all over Asia taken by the Japanese Imperial Army and at least 1000 of them were Filipina, and of that number only 173 of them have come forward, what happened to the remaining 827 (at least if not more)?

The students nodded at me and said, "They're living among us still."

Our leaders want to do the right thing, but they cannot move without your consent. They cannot act unless they understand this is what their constituents need.

We should all be writing Congress, but those in the Bay Area may truly change the course of history. Congressman Lantos is the Chairman of the House Committee on Foreign Affairs. Congresswoman Pelosi is our Speaker of the House. They are the key leadership who will guide this resolution to its natural end. See to it that they know what you want, give them direction. Let it be known (and here I am talking to my brothers and sisters in the Filipino American Community) that we support the women who despite these atrocities have been graced with the strength to carry on, to live lives with dignity and love. They deserve their justice. 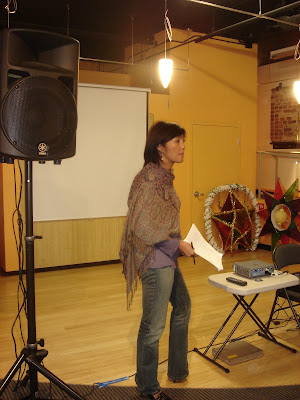 I include some of the letters written this week to Lantos and Pelosi. They speak for themselves:


Dear Congresswoman Pelosi,
I am a Filipina American citizen who lives in your district and I have read House Resolution 121 asking for a formal apology by the Japanese government to the Asian women who were raped and abused during WW2. I support House Resolution 121 because my lola (grandmother) suffered from the abuse and humiliation of Japanese soldiers during the war, especially when they invaded the Philippines and established garrisons to capture Filipino women. My lola's memories and experiences are my history and her struggles are my struggles. I ask that you please support House Resolution 121 and demand that the House of Representatives, Senate and Congress come to a full vote and pass it.


Dear Congressman Lantos,
I am a Filipina American woman and I have read and support House Resolution 121. I am saddened by the state of events that have occurred in the lives of these women. I would like to have a resolution passed because these women have lived a lifetime in secret and deserve a semblance of dignity and honor. As a woman who has endured sexual abuse, I can honestly say that an apology will allow these women to be free of their past, a freedom long overdue. Please support House Resolution 121 because it could have been your mother, grandmother, wife or daughter.


Dear Congressman Tom Lantos,
I am a Japanese American citizen who lives in your district. I have read House Resolution 121 and support it because as a woman, I know that it is my responsibility to be by any woman's side through any struggle. This resolution is important to me and I ask you to support it too. Please mark up House Resolution 121.


Dear Nancy Pelosi,
I am a Filipino immigrant and I have been living in the U.S. for 15 years. My grandparents petitioned my family to come to the U.S. due to his service in WWII. This resolution is personal to me because the stories of these women deserve to be heard. Please bring House Resolution 121 to full vote.

House Resolution 121 is at a crucial phase. We would like the House Committee on Foreign Affairs, Tom Lantos' committee, to mark it up. In the next few days your letters and phone calls are a strong and powerful tool. I urge you to express yourself. Write to them. Call them. Email them. Not just Pelosi and Lantos but all members of Congress.