Filipino American Lit at SFSU Activates Their Voices and Their Pens 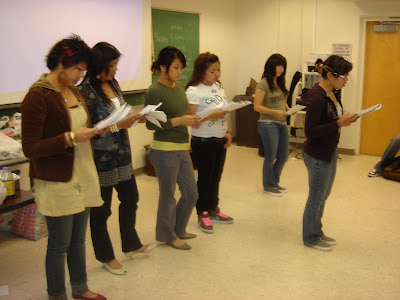 I walked into Allyson Titiangco-Cubales' Filipino American Lit final and it was WILD. There were 50 students hungry for the truth. Six students read the testimonies of six surviving Filipina "Comfort Women" and then the whole class, including some who were not even part of the class and who had traveled from other parts of the Bay Area, sat down in their desks and wrote. Below is a letter from Michelle Ramos to her Congressman and the Chair of the House Committee of Foreign Affairs, Tom Lantos. See the truth in the shape of her words ...

I am writing you in concern of the injustice toward the "Comfort Women" of the Japanese Imperial Arm during WWII. For years their stories have been held silent and not recognized. Women and girls as young as twelve were taken and used for sexual service night after night. Abduction and systematic rape have extreme consequences to the physical and mental body of a woman -- and as a woman I cannot even imagine such horror pitted toward me or anyone else. There were so many women, but where are their stories? Many women did not survive from this and many others are so scarred that talking about these experiences surfaces painful memories. Just having heard these stories brings a flood of tears and pain that strikes my heart -- No one deserves to be raped! I as well as these women know that they deserve at least an apology from the Japanese government -- it won't fix the past, but it will start building a bridge for healing.

I am a resident living in your district and I urge you to mark up HR 121. These women deserve to be recognized because injustice should not stay silent.