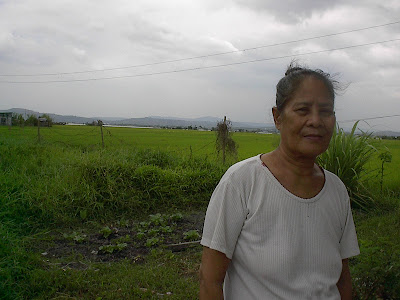 When the truck came to the main road, we saw thousands of people from the neighboring towns all lined up and ready to march from Dumagit to New Washington. There were miles and miles of people, Evelina. Old and young and entire families. My mother and cousins were there. I could not stop weeping as we began the long march to New Washington.

The sun was so hot that day and there was no shade for us. We had to walk and walk. And as we did the Japanese taunted us with their guns, hitting us with the back end of the gun, poking us with the bayonet. When the old people grew too weak to walk, they shoved them with their feet; they spat on them. Of course, when you’re old you walk slowly; so then they bayoneted the old. When the children cried too loud and faltered in their step, the soldiers slapped them over the head. Sinipa sila! HMMM! Sometimes they shot gunfire through the crowds to scare everyone to move faster. I thought to myself, this is it. We’re dead. We walked what felt like hours. The hot sun took all the water from our bodies, left our throats parched and our tongues dry.

I have no idea how far we walked, but by five in the afternoon, the long line of people had reached New Washington. I could see all the people in the plaza lined up and waiting. There were many many people there from so many other barrios. Too many to count all of them. The Japanese had gathered all our people like they were collecting coins, pooling us all together like that then counting us and dividing us into groups.

The garrison was inside the compound of a coconut plantation surrounded by barbed wire. The gates we walked through were made of bamboo. From the plaza we could see the main building, the plantation owner’s house. You know, Evelina, that guy gave his house to the Japanese – he was a collaborator, a Makapili! All along the compound, Japanese soldiers stood guard, holding their long bayonets up in the air, ready to attack.

And then they started to divide us. It made me even more scared when they separated all of us. “Old people over here! Men over there! Families here!” And all the women, they put inside – everyone else stayed outside, but they put us in the basement of a kopra warehouse.

They didn’t speak to us – but threw us one by one into one of three rooms. I counted twenty-five women in my room. There were no chairs. No beds. No rugs to sleep on, only the cold floor. We sat there on the floor, our legs drawn to our knees, our faces covered in sweat and dirt and we stared at one another, not talking, not knowing what to do. Since they had gathered people from several barrios, we were not accustomed to the faces before us, and this made me even more nervous.

We could hear screaming from outside our room, and some noises. I leaned on our thin wooden wall and listened. The wall was made of soft cheap wood. If I pressed my finger hard enough I could make an impression. Someone poked a small hole and we could see more women on the other side. Twenty-five of them. We took turns looking into the hole, as if we might recognize someone there, as if seeing them might bring us help. But do you know what it is to look through a hole as big as your finger and only see yourself looking back? It was a cage of wood – without any windows except a small one with bars. If we wanted to look outside, we had to climb on the tops of each others' shoulders, just to get to the light. But when we got to the top of the window, all we saw was more death. In the plaza, they would line civilians up and execute them.

They had no mercy, Evelina. They’d slice the pregnant women’s bellies open and yank the baby from the womb. They’d take their hands and rip the cord from the mother and child. Then they take that baby and they toss him high to the sky and make a game of skewering newborn infants on the tips of their swords. So many babies tossed in the air that way. So many of them caught by on the sharp end of a bayonet. That is how they were.


If you have not signed the petition or written your congressperson PLEASE SIGN!!! We are 400 names shy of 2000. Remind your friends. Show your support and spread the word. This is not how we treat our women. This is unacceptable.