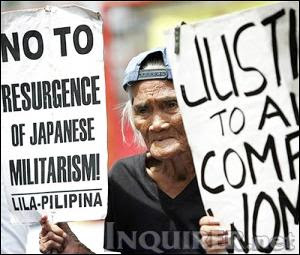 MANILA, Philippines—Two dozen elderly Filipino women and their supporters protested outside the Japanese Embassy in Pasay City on Friday demanding a clear-cut apology and compensation from Tokyo for wartime sexual slavery.

Japan has acknowledged its troops forced women into front-line brothels across Asia during World War II, and its leaders have apologized.

But last year, many surviving "comfort women" were outraged when then-Prime Minister Shinzo Abe said there was no proof the women were coerced, adding to suspicion that right-wing politicians in Japan refuse to face up to wartime atrocities.

The US House of Representatives and the Dutch and Canadian parliaments have passed nonbinding motions urging Tokyo to offer a formal apology, but Japan has refused.

"The Japanese government should publicly apologize and put in history how the women were abducted and forced to serve in the comfort women system," said Rechilda Extremadura, head of a group called Lila-Pilipina that has documented 174 cases of Filipino women who were forced into wartime brothels. About 100 women remain alive.

"This is a war crime," Extremadura said. "But the Japanese government continues to be deaf."

The Japanese Embassy in Manila refused to immediately answer a request for comment and asked that questions be e-mailed.

Tokyo has generally refused to pay damages to individuals for the war, saying the issue was settled between governments in postwar treaties. Japanese courts have rejected a number of lawsuits brought by former sex slaves.

The left-wing women's group Gabriela, which joined Friday's protest on the 63rd anniversary of Japan's surrender in World War II, criticized the Philippine government for not acting on a draft resolution seeking Japan's apology that has been filed in the House of Representatives.

Anonymous said…
Hi. :] I see that you've got many posts about the Lila Pilipina. Well I am a sixteen year old student doing a research/thesis about the comfort women of the Philippines during the Japanese occupation. And I really need your help. Please if you can, contact me at deajenine92@yahoo.com.It would really help me aloooot. Because I really need to get sources about them, please please help me. Thank you very much! I hope you'll respond to this. :]
November 10, 2008 at 7:50 AM