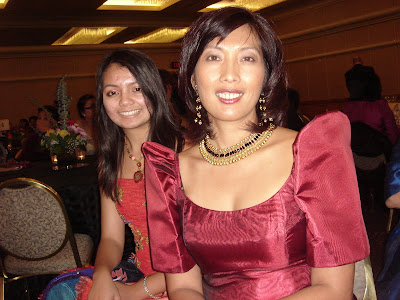 I have just come back from attending the Filipino Women's Network Summit, an amazing four days in Washington DC where strong women gathered on Capital Hill to discuss their work as activists, leaders, working women and business moguls. The group named the 100 most influential Filipina Women in the U.S. and I was honored among them with the "Nicole" an award that "honors Filipina women whose words, actions, and activism, inspire others to act and revolutionize our society's way of understanding traditional beliefs and customs. This category is inspired by "Nicole" who sparked an international dialogue about women's rights, national sovereignty, and international law as she steadfastly pursued justice against her rapists."

Thanks to Marianne Villanueva for nominating me.

More importantly, this award is a working award and we have been asked to choose a protégé to mentor for the next five years. I found this to be an amazing opportunity to share the work and the stories of the lolas with another young woman leader, so I put a call out on my campus at the University of Miami. I was looking for a freshmen or sophomore woman of Filipina descent to mentor as we grow "Friends of Lolas" at the University of Miami.

Below is the winning essay written by Rhea Olegario of Pembroke Pines, Florida. The photo is of the two of us on the night of the gala award ceremony in Washington DC.

Welcome to the struggle, Rhea! Congratulations!


Pinay Protégé Essay
By Rhea Olegario
I can easily recall the first time I heard about the comfort women of WWII. It was during the annual 2007 CFAGA Filipino Independence Day held in my hometown of Pembroke Pines. Wanting to find something to do, my friend and I were passing by the various booths that they had. One, in particular, was called Laban for the Lolas. Not thinking much about it, I probably would have passed it by had not one of the young ladies behind the booth vigorously approach us and inform us of their cause. I remembered feeling ashamed and moved at the same time when I heard about the horrific experiences these comfort women had to go through. Before I always would hear about the injustices occurring throughout the world such as those in Darfur, but it never occurred to me till that point that such injustices could hit right at home. I was ashamed about not knowing sooner about this issue. But I was also moved at how these inspirational and courageous Lolas are standing up along with their supporters to fight for their overdue justice. Recalling dark pasts especially out to the public can never be easy. Further adding to what I learned that day, I see, especially now, how important being informed and sharing information are. Had not that young lady approached me, I wonder how long would I have been ignorant of this issue?

Since my first encounter with the issue, much progress has been made by the Laban for the Lolas—most notably the passing of House Resolution 121 by Congress. Consequently, Laban for the Lolas has taken on a new direction and focus: to eliminate present and future ignorance of the issue of comfort women, especially Filipino comfort women, through the awareness and education of the public and to support the mission of the surviving Filipina comfort women of Lila Filipina, The League of Filipina Grandmothers. It absolutely humbles me to be afforded the opportunity here at the University of Miami to not only encounter for the second time the organization, now named Friends of the Lolas, but also to contribute to the organization in a way like never before. Recently ushered into the world of college, I am quickly becoming acquainted with the idea that one’s role in the future is largely determined by the actions done in the present. Therefore, this opportunity for me to be a significant part of the Friends of the Lolas would guide me into the long-term path I plan to take: Fighting against injustices in the world and aiding and supporting people who desperately need it. It is through my qualifications, experiences, and drive that I find my motivation to actively participate and take part in this urgent and needed cause.

Since High School, I have been involved with many service organizations that I have felt passionately about. In Respect Life and Social Justice, not only did we learn about issues surrounding faith and society, but we also in turn passed on the knowledge and took action through various activities like walks and informational seminars. Additionally, through my favorite project, Hope Outreach, where we mentored young children of low income families, I realized the importance of taking an active role in the community. I began to see the effects of my mere participation in the project: it made the children see that they were special and very much mattered (not that they never did). As my favorite quote by Mahatma Ghandi goes: “The best way to find yourself is to lose yourself in the service of others.” It was through these projects that I discovered my passion to serve and inform the community.

As far as leadership positions go, Editor-in-Chief for my school’s yearbook would be my main experience. Some of my tasks would entail coming up with ideas to write articles on, coordinating events such as Class Picture Day and athletes’ sport photos, and organizing important and numerous items such as Senior ads. With a student body of more than 2000 and a faculty of a little more than 100, it was never easy—intense planning and efficient coordination were a must. As Editor-in-Chief, I dedicated a lot of time into composing our award-winning yearbook. My dedication to the yearbook could be seen through the long hours that I worked. I believe that the skills I learned as Editor-in-Chief for my school yearbook would enable me to coordinate events, organize efficiently important matters, and come up with interesting ideas, especially for fundraising for the Friends of the Lolas.

What mainly fuels my motivation for being an active member, however, is my passion for fighting for justice and human rights. Some of the goals that I have set for myself are to be involved in international organizations where I can aid people, especially those who are suffering from injustices. After reading about the horrific experiences of brutality and systematic rape that Maria Rosa Henson went through, I knew that for comfort women like herself to finally close that unimaginable chapter of their lives, apologies are to be made by those responsible i.e. the Japanese government. With the Japanese government unresponsive to the women’s requests, supporting these amazing women, who have gone through so much, in any way I can would be an honor for me to take on.

I could easily recall the first time I went to the Philippines, a third world country. The homeless children that I saw on the streets are haunting memories that still stick with me today. Nevertheless, I also saw images that made me proud to be a part of this amazing country: I saw like never before the night sky bursting with stars, unhindered by city lights; I saw immense crowds of people of all classes flocking to Church and praying as one; and, most of all I, saw and experienced from my distant relatives the compassion, humility, and warmth that are so indicative of the Filipino people. I am proud to say that I am a Filipino-American. So upon hearing the injustices the Filipino comfort women had to go through like Maria Rosa Henson, I knew then and there that I had to find a way to support them. During the Filipino Independence Day Festival, I supported them by writing a letter and encouraging my friends to do so. However, now with the opportunity to take on a significant role in the organization itself here at the University of Miami campus, I know that I must give everything I can to assist them in anyway so that their plight will never be forgotten by the world. For the country that has given me this rich heritage and for the people who have given me nothing but love and support, I know I would full heartedly and uncompromisingly carry out my role in the Friends of the Lolas to the best of my abilities.