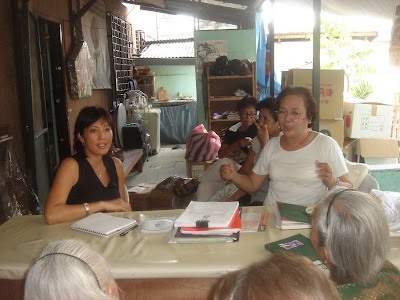 I arrived at LOLAS' HOUSE on the fourth of July. They were singing into a mic to images on a videoke machine. They were so involved that they didn't even see me standing there, but when they did, OH BOY! So many hugs and kisses.

As I spoke in my broken Tagalog, LILA Pilipina director, Rechilda Extremadura translated the more difficult ideas and phrases. Meanwhile, the lolas read the messages many of the supporter sent to them in the green book. One lola told me it made her feel so good to see how "fat the hearts" of the supporters are in America.

They are really grateful for the efforts of House Resolution 121. They hope it passes and that Japan takes note.

They hope that rather than speaking to the press or to President Bush or to members of the Diet that the Japanese government talks to them directly.

They are so glad for our efforts, but that is not to say are sitting still in Manila. The lolas of LILA Pilipina and their friends and family -- Friends of Lolas -- are still campaining hard.

They are happy that so many of us have joined their efforts.

More soon.
(If you are interested in starting a Friends of Lolas Chapter in your area, email me at labanmgalola@yahoo.com) 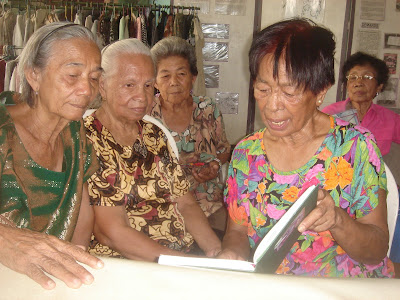