UM's 2nd Annual DIE IN: In Solidarity with the Dignity Walk for Women and Girls Everywhere, We Bear Witness 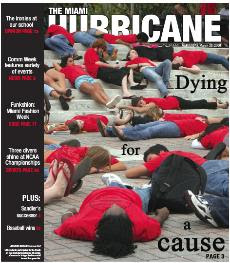 In solidarity with the International Dignity Walk to support House Resolution 121 and the plight of all surviving Comfort Women, the University of Miami's chapter of Amnesty International is hosting a DIE IN on April 26, 2007 from 12-2PM at the university's ROCK. In addition to the DIE IN, students will read testimonies of surviving Comfort Women to honor their experiences and to support of their struggle for justice.

...of 700,000 people that are trafficked for sexual exploitation around the world each year.

...in over 15,000 people killed each year in alcohol-related crashes.

...of the 85% of victims of rape who know their assailant.

...of 66% of homeless people denied admittance to shelters every night because of limited space.

...of the 1.5 acres of rainforest lost every second.

...of 2.5 million victims of domestic violence every year.

...of 50,994,407 gay people living in countries in which homosexuality is punishable by death.

...of over 600,000 Americans who has given my life for world freedom and peace in war overseas.

...of 2,300 children diagnosed with cancer in the United States every year.

...out of every 3 women who is beaten, abused, or raped during their lifetime.

...in 4 college women who have either been raped or suffered attempted rape.

...of 4 children who die every day due to child abuse or neglect.

...of the 2.2 million people who die worldwide due to unsafe water. (Nine out of 10 of these deaths were children under five).

...of those maimed or killed by a land mine every 30 minutes.

... of 200,000 WWII women and girls in all of Asia who were abducted and coerced to live as military sex slaves.