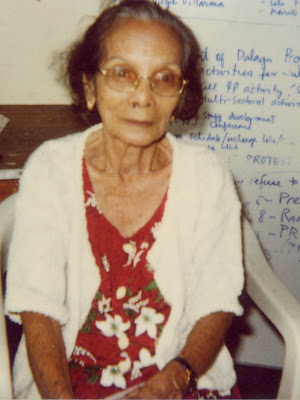 In a room of about forty women, Lola Catalina Lorenzo smiles at everyone sweetly, leaning back in her plastic chair. She seems indifferent to the chatter. At the very edge of the circle of women, her eyes dart back and forth, following the other women’s words. It begins in a whisper. They take turns. Each one speaks a little louder than the last. The words get faster and I must strain to keep up. My ear is not yet used to the language, to the accents, to the speed of the tongue. Soon, each woman leaps into the conversation just as the other finishes. The gaps between the women’s comments dissolve and they begin to speak over each other’s words. Lola Catalina leans forward, thinking, listening. She pulls her chair further into the circle. She leans on both elbows. The camera pans to the other side of the room and one of the more dramatic lolas is pounding on her chest, crying. And even as this lola recites her grievances, her arms waving in the air like white flags, Lola Catalina’s voice shouts from off camera: “Filipinos did not fight in the war!” The camera swish pans to the left and a blur of light streaks across the screen. “The Filipinos were quiet. Then the Americans came and they made a playground out of the Philippines!” Her little body shoots up from its seat and suddenly, this eight-five year old woman takes command of the entire space.

Lola Catalina mimics the Japanese planes of World War Two. She places her hands in prayer position before her heart and then climbs the skies with those hands clasped, reaching above her head, the hands in flight, moving across the room. Her body dances before a window and the sun blazes behind her, erasing the expressions on her face. The light pushes through her floral skirt and we can see her legs, bent and wiry. Her shadow darts about the room, circles fellow survivors, a few organizers and my five Filipino American students and I. “It is as if they are slicing the sky,” she says now separating her long thin arms as if there are shards of blue falling around her. I see a hand reach up to pull her down, someone attempts to pet her, to calm her, but she cannot stop now. “Ingat, Lola,” calls out a voice, a warning. Everything she ever thought in these fifty years of silence unravels before us. “What do you think? We don’t need their money, we need their sincere apology, we need justice. Americans and Japanese – did you see what they did to our country? To our women? To our families?”

My students and I want to connect with our ancestry "back home." We want to go to the places where our parents were born, to the houses where our grandparents still live, to find our place in this world, in this culture. But we are met with distrust, with frowns. Lola Catalina Lorenzo was born in Tondo, a district in Manila. Her father and my father come from Macabebe, Pampanga. I am immediately drawn to her. But she is looking at me like I am a dangerous criminal, shooting those words right at me. “Even if the whole world knows what they did to the Philippines, it will be very hard to make up for it. That’s why, what you’re doing, you’ll never really know. But me, I am old. I know what they did here.”

Too many strangers have come their way with the same mission. Too many well meaning Americans and Japanese and who knows who else have traveled thousands of miles only to charm these ladies, feed them, kiss them, put their fat, first-world arms around their tiny third world frames only to abandon them. No, not again, Lola Catalina is saying. No. You are all responsible.

We fear Lola Catalina may collapse, that a heart hot with such passion might give out in a body so small, and bones so frail. I want to tell her I too am Capampangan. I can say come here -- me kenne -- and I can say yes –oah. My last name means respect in Tagalog. I am the daughter of Miguel Trinidad Galang and the granddaughter of Miguel Galang senior who was a soldier in the Filipino army and a dentist who served all of Macabebe. The Galang house in Macabebe is across the street from the elementary school, the place the Japanese soldiers took and made into a garrison. I have been raised in Wisconsin among the descendants of the Germans and the Poles, but I have been raised with the same values Lola Catalina's family instilled in her. More than anything, I want her to see me as I am and to trust me. But on this first day, in June of 1999, her hands flutter fast like knives slicing the air, her voice begins down in the very bottom of her feet and pushes up like a volcano erupting and her words splatter the air.