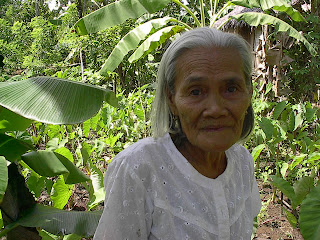 Above, is Lola Piedad Nobleza standing in the spot in Madalas, Aklan where she was abducted on Januray 16, 1942. She was stooped over cutting grass and when she stood she found two Japanese soldiers beside her, waiting to attack.

To support Lola Piedad and all Comfort Women, write the Speaker of the House, or if you’d rather, go to the online petition and sign it: http://www.gopetition.com/online/11466.html. The text is below.

We the undersigned request you to support House Resolution 121-1H. We urge you to bring the House Floor to a full vote.

Historians and researchers in South Korea and Japan discovered several official war documents in the late 1980’s that established the existence and systematic abuse of WWII Comfort Women. They estimated 200, 000 young women were taken hostage by Japanese soldiers to serve as military sex slaves from all of South East Asia.

After fifty years of silence, surviving Comfort Women have broken the culture of shame to document their experiences of systematic rape and sexual slavery by the Japanese Imperial Army. Their demands are simple -- they would like a formal apology and reparations for the war crimes they suffered, crimes that continue to affect their aging bodies in physically, mentally and sexually abusive ways. The women make their demands in order to reclaim their dignity, and ensure the safety of their own daughters, granddaughters and now, great granddaughters.

The surviving Comfort Women are mostly in their 80’s now. Many are dying. We urge Congress to act swiftly so that some may see justice before they pass away.

Anonymous said…
I was surprised to see your blog's sidebar, because "A Comment from Kansai Province" is the one that I added to my petition!

The curious Japanese who signed name "Niphonese the Japanese" is me. I added the comment because I wanted to show that I seriouly agree to the petition statement.

I was taught your blog from Mr. Eunheui's information.

I think Japan is now in a curious contradiction. While the Japanese government is preparing for the ratification of the Rome Statute of the ICC, it refuses to deal sincerely with the past war crimes of its own.

The international justice system of the ICC is aimed at the end of impunity as to most serious international crimes, including war crimes. If the Japanese government thinks seriously of acceding to the Rome Statute, I believe it must take responsibility for the comfort women problem.

Now Japan is rapidly swinging to the right. Please read an article I wrote. Though my English composition may be a bit awkward, I think the article could help you understand an reactionary tendency in recent Japan.
March 16, 2007 at 9:54 AM