Why Has Such A Bias View Prevailed? 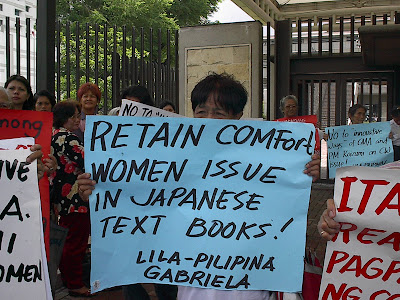 On March 31st, in the second of three installments, the article, which does not appear in the editorial pages, but in national news, states the following:

The U.S. House of Representatives has been deliberating a draft resolution calling for the Japanese government to apologize over the matter by spurning the practice as slavery and human trafficking. Why has such a biased view of the issue prevailed?

The issue of the so-called comfort women has been brought up repeatedly because misunderstandings that the Japanese government and the Imperial Japanese Army forced women into sexual servitude have not been completely dispelled.

The government has admitted the Imperial Japanese Army's involvement in brothels, saying that "the then Japanese military was, directly or indirectly, involved in the establishment and management of the comfort stations and the transfer of comfort women." The "involvement" refers to giving the green light to opening a brothel, building facilities, setting regulations regarding brothels, such as fees and opening hours, and conducting inspections by army doctors.

However, the government has denied that the Japanese military forcibly recruited women. On March 18, 1997, a Cabinet Secretariat official said in the Diet, "There is no evidence in public documents that clearly shows there were any forcible actions [in recruiting comfort women]." No further evidence that could disprove this statement has been found.

If the editors of YOMIURI DAILY want to clear up the controversy of the WWII Comfort Women, answer the women directly. They have spoken. The installments speak around the women, yet the women stand before our global community and they are asking Japan to explain. To apologize. To take responsibility. Answer the husbands, the mothers, the fathers, the brothers and sisters, the children and grandchildren. Answer the people.

The comfort women from LILA Pilipina speak from the heart, they carry the evidence on their bodies and their words are the public documents that express not only the coercion in “recruiting comfort women,” but in the treatment they received while under captivity.

Today, someone anonymously sent Laban! Fight for Comfort Women a link to the Yomiuri articles. Thank you for sending them, but I am already aware of them and have posted them under the International Media Links. I have set them along side of the other articles and I encourage readers to weigh that propaganda against the stories of Lola Remedios, Lola Naricisa, Lola Ashang, Lola Pilar, Lola Piedad and all the other lolas I have yet to mention.

And of course there are the thousands of women throughout Asia whose stories live with their families, with their friends and with their supporters. I ask that all comfort women – survivors and friends of survivors unite, record the testimonies, make them known. Create public documents. Carve the stories of their lives on our backs so no one will forget and everyone will know, even when they’re gone.